I’d shot with both Grace and Katie in the last month or so, both fairly new to modelling, both seeking variety for their portfolios. and both said they would be very interested in shooting with another model.  It doesn’t take a genius … 🙂

We’d agreed the theme for the first part of the shoot would be a hot couple after the style of the raunchy perfume adds on TV and we’d shoot, nude, lingerie and jeans.

Put them in a room with a couple of other people they know only vaguely and ask them to take off their clothes and get up close and personal.

It says a lot about their sense of professionalism that neither batted an eyelid.  They just went for it.

It says even more about their sense of humour and fun that within 20 minutes they were behaving like old friends, absolutely comfortable with each other, laughing and joking between shots as they acted their parts and giggling over who should play the man 🙂

As always my shooting script allowed for a logical development from set to set, and as always that went out of the window when the ideas started to flow from the models.

At our last shoot Katie had suggested a great shot that had her nude with a Samurai sword.  Now I’m not daft, for this shoot I’d borrowed a pair of katanas and a gleaming decorated sword that the owner called a ‘vampire slayer’.

I suppose I shouldn’t have been surprised that it was Grace that took to the swords and despite never having handled one before, was delivering credible poses within minutes.

Katie took the more reserved role, looking great in a kimono, the warrior’s lover, or could that be ‘slave’?    🙂

As always we ran out of time before we ran out of shooting script and ideas and finished the shoot in a more gentle and feminine lingerie set.

When Linda and I really enjoy working with a particular model were always keen to bring them back in to finish those parts of the shooting script we didn’t get to. Sometimes it’s the model asking to come back which is always great, so I was well chuffed when Grace and Katie were putting there heads together to plan a whole series of shoots they wanted to come back for. 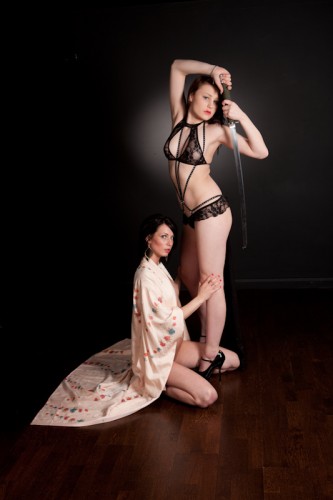 4 Comments for Grace and Katie

Omg, I had the best day ever, I definatly enjoyed playing the domin one 😉 did get lot of wedgies but I was so comfortable with being myself around Ian and Linda, your really both amazing people..Linda makes a cracking brew. I enjoyed working with holly amazing laugh, and stunning girl I was honoured to work with her. I can’t wait till we shoot again.

Brillaint shoot can’t wait to see you and Linda again

Thanks Grace, we really enjoyed working with you and just having you around. You and Holly were great together and we were amazed just how comfortable the two of you got and so quickly 😀
I’ve got a weekend with both your names on it and maybe another couple shoot before that, and I’ve at least two shoots for you solo. We’re going to have fun and get some great pix :))

Is there an album to see more of this set or any more planned with (or of) grace?

Grace (and Katie) have galleries in the ‘Models 2’ gallery section and both models have said they want to come back to shoot again, but I don’t have a date for that. Watch this space.

Grace features in four posts in this blog, one with a few pix from the shoot.