You should be a model Sean

Sean told me his partner, an experienced model, had pestered him to try his hand at modelling, saying he had looks that would get him work if he learned the skills.  With a well proportioned 6’3″ frame complementing youthful good looks, she was right.

He’d told me when we arranged the shoot that he was in the process of building up a wardrobe, but as my project work would be nude he suggested making the whole shoot nude.  I wasn’t about to argue, but even before we met, I had a suspicion I’d be bringing him back to shoot fashion if we could get the right gear.
This was to be his second shoot and he admitted to nerves and was eager for advice and direction, which I’m always happy to give to new models.
Sadly, I was hampered in this shoot by the absence of my studio assistant Linda, and the first sign of that was getting straight into the work without Sean getting a cup of coffee.  That would never have happened is she’d been there.  Sorry Sean.
I was delighted at his lack of body modesty, which meant he was thinking about getting the look, right rather than worrying about ‘showing too much’, so we were getting potential ‘keepers’ right from the outset and we quickly worked through the signature poses for the project.
I think he was quite surprised at just how much effort went into some of those effortless poses, but it was clear he was determined to deliver the looks I was asking for and that he was having fun 🙂
By the end of the shoot I was very pleased with what we had produced, but I couldn’t resist nipping out to fetch a shirt and jacket and doing a handful of beauty shots, ‘just to see’.
We’ll be working together again and I think he’ll be doing quite a bit of modelling in the future 🙂 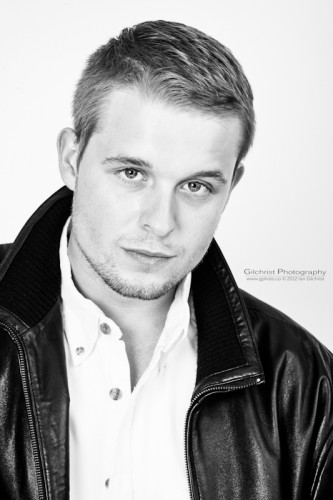 Click here to see some more images from the shoot